Most commonly associated with China, Chinese New Year is in fact celebrated around the world. While most Westerners’ interaction with ‘Chinese New Year’ is watching parades in Chinatown, traditions vary from country to country. The holiday more aptly called Chinese New Year, as it marks the start of a new lunar cycle, is one of the most important holidays in Asia.

During Chinese New Year, people have a long list of things to do. From one week preceding the festival to the 15th day after, many Chinese New Year customs are widely observed for thousands of years. The family reunion dinner, eating dumplings, and setting off firework are the must-dos that you might know.

The following 8 traditions of Chinese New Year must be the list you are looking for. 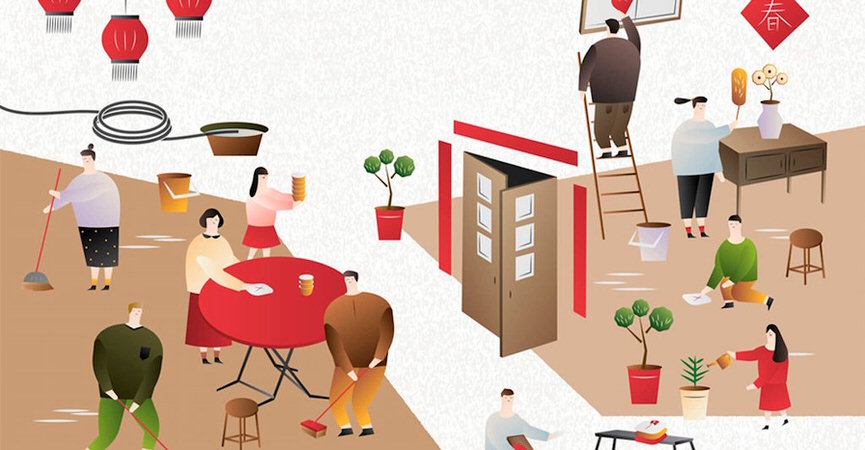 Cleaning the house is a long-observed Chinese New Year tradition. The ground, the walls, and every corner of the house need to be cleaned. In Chinese, “dust” is a homophone for the word “chen", meaning the old. Therefore a year-end cleaning is needed to drive the old things or the bad luck away from the house, and get ready for a new start.

It is important to do a thorough clean up of the house before the New Year comes, so as to get rid of all the bad luck gathered from the previous year. During the first three days of New Year, it is important to remember not to do any major cleaning or sweep the floor. Otherwise, you will sweep away any new good luck! 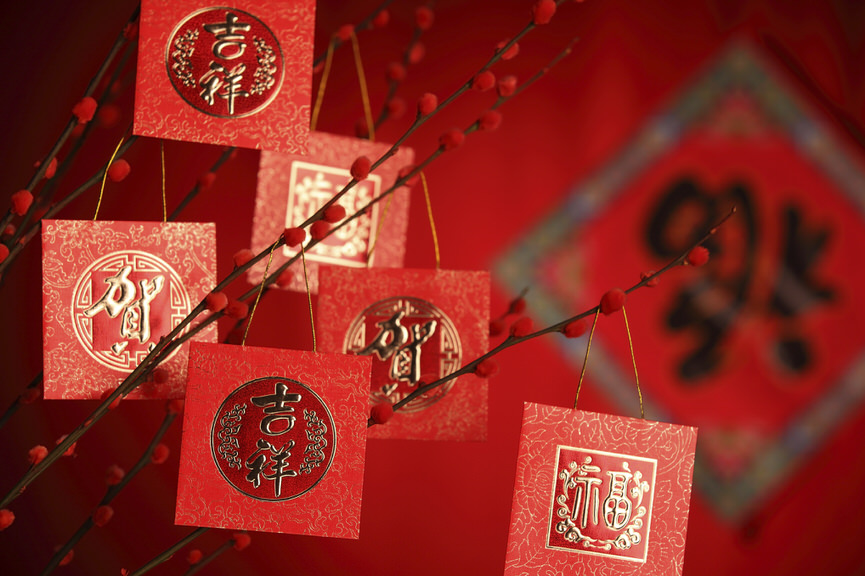 From clothing to lanterns and calligraphy—bright, vivid red is the color of choice for Chinese New Year. It’s used in abundance everywhere feasibly possible during new year preparations. Red is considered an auspicious, lucky color in Chinese culture no matter the occasion, but particularly so during Chinese New Year.

Love of the color dates back to a centuries-old belief that evil spirits don’t like red. Nian, the mythological beast who comes out to wreck villages and feed—sometimes on children—hates noise and the color red. White and black are funeral colors; avoid wearing them to Chinese New Year parties. Vivid red is the color of choice. 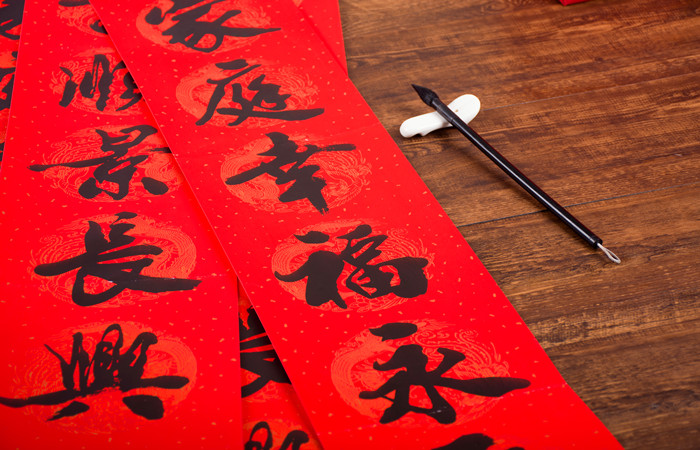 Also known as Spring Festival couplets, these messages bear good wishes for the vitality of life, happiness, wealth, and prosperity. Couplets are typically pasted on doorways as a part of the festival's decoration. The couplets include two vertical scrolls on two sides and a horizontal scroll on the top on red color paper.

You can either write your own couplets or get a professional to do this for you. Look around in the flower markets and street markets, there is usually a calligrapher sitting in front of his stall, with brushes, and inkwell ready to deliver the good words with strokes. 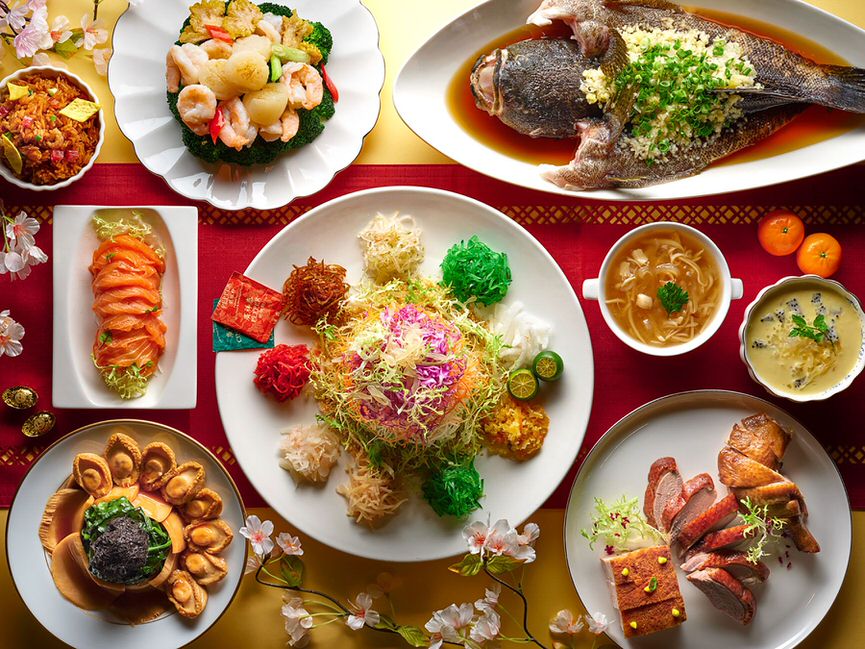 What would a holiday season be without delicious dishes served for the occasion? Family members typically gather on New Year’s Eve for a traditional meal that encourages indulgence and symbolizes abundance. Foods are chosen for their lucky sounding names or auspicious shapes. Meals differ from region to region, but most include eight (an auspicious number) courses of a meat-heavy lineup along with a whole fish of some sort.

The fish is deliberately served late and not finished; the leftovers are saved. Not finishing the centerpiece of the meal symbolizes how the new year will be filled with surplus and abundance. A communal hotpot is also prepared in some regions. The sharing and cooking of food fuels an atmosphere of togetherness. Some other traditional dishes and lucky ingredients include jiao zi (dumplings), noodles, nian gao and Mandarin Oranges. 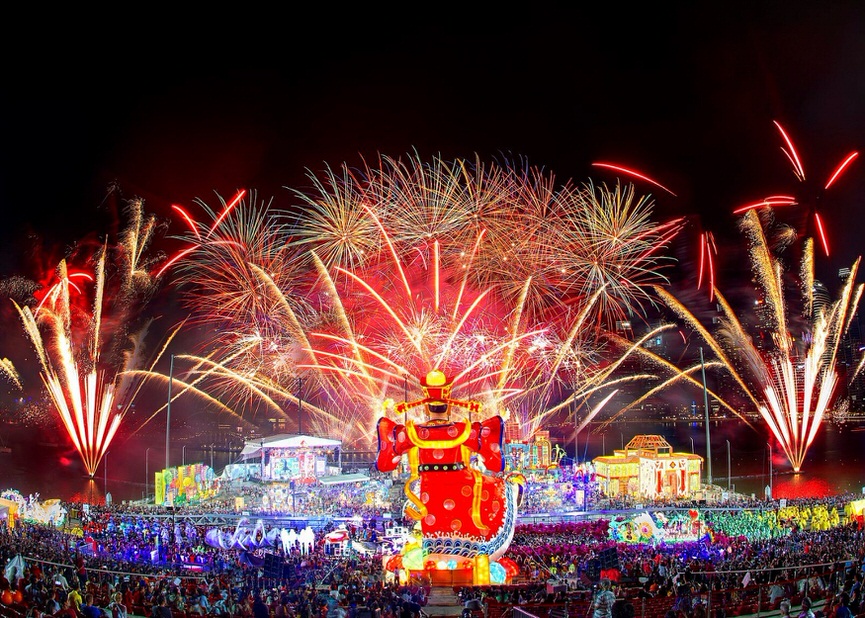 Other than just fun, the noise was meant to scare away malicious spirits, particularly the Nian. Because personal fireworks were banned for safety reasons in many places, local governments began organizing large fireworks shows to kick off the new year.

Firecrackers are thrown again on the fifth day of Chinese New Year to draw the attention—and favor—of ​Guan Yu, a famous Chinese general who is worshiped as a Taoist deity. The fiercely honorable general is depicted in temples and art throughout Asia holding his guan dao—a staff with a heavy blade on one end. 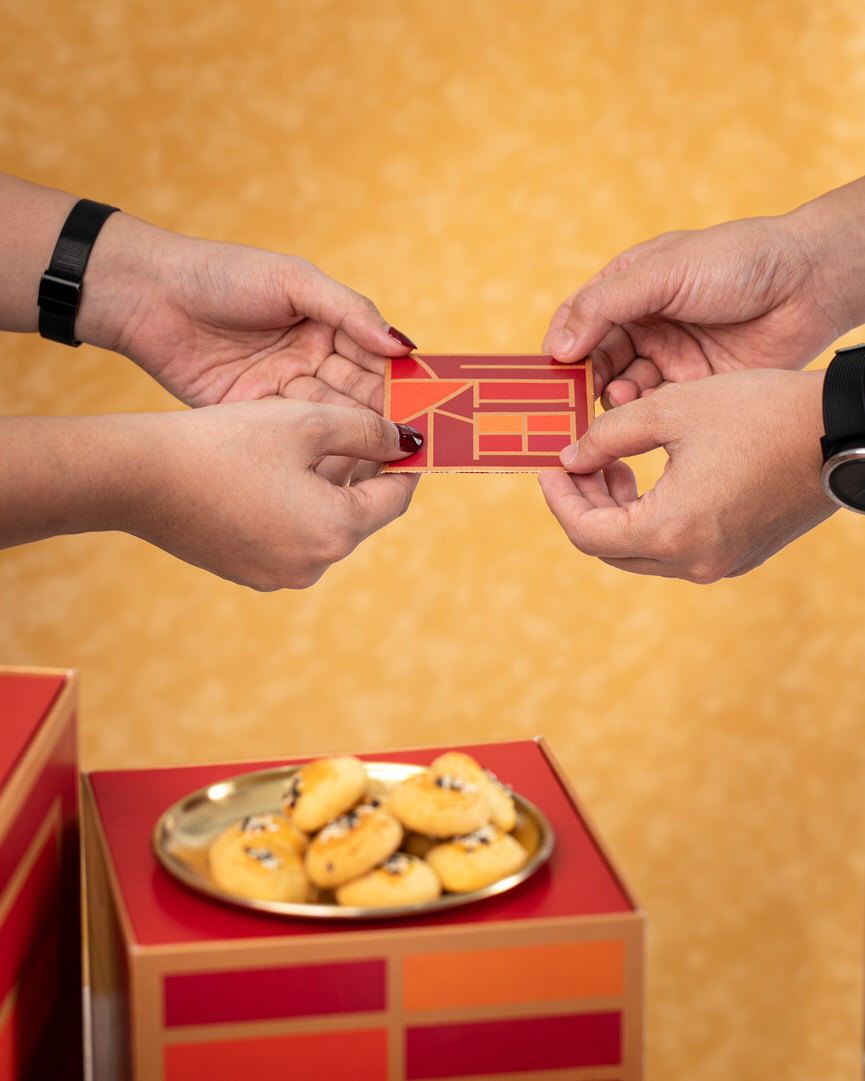 Forget greeting cards—give red envelopes instead! Known in Mandarin as hong bao, red envelopes containing money are often given from elders to children or unwed young adults. People with more seniority also sometimes use red envelopes to give gifts and bonuses to staff.

As with other traditions during Chinese New Year, symbolism is key. The amount of money given should be an auspicious number. Even numbers are preferable. The amount to give is a subject of much debate. Because of similar-sounding words, six and eight are considered very lucky, while four is unlucky and should be avoided. Some lucky amounts are 88, 108, and 128. Banknotes should be as new and crisp as possible; never include coins! 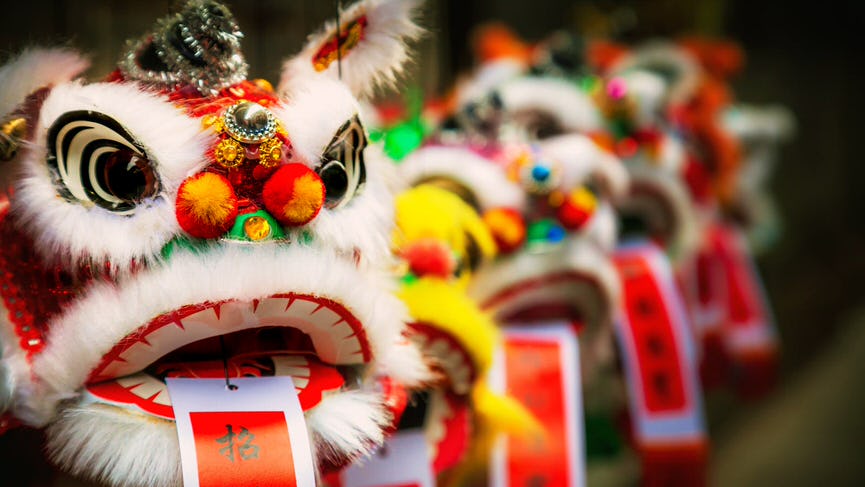 Yes, the two are different! The lion dance, performed by two acrobats inside a single costume, is the more common of the two dance traditions seen at celebrations. The ferocious, four-legged creature is widely—and incorrectly—referred to as a “dragon" by Westerners who aren't familiar. Dragons look entirely different. Rather than two acrobats inside of a single costume, the dragons are long creatures lifted up on poles to be controlled by performers.

Traditional dance troupes perform impressive, acrobatic feats with heavy props amid blaring noise. Drums, gongs, and firecrackers create chaos meant to discourage spirits with ill intent. Lion and dragon dances are performed on other occasions as well, but they are definitely one of the top traditions of Chinese New Year most enjoyed by travelers. 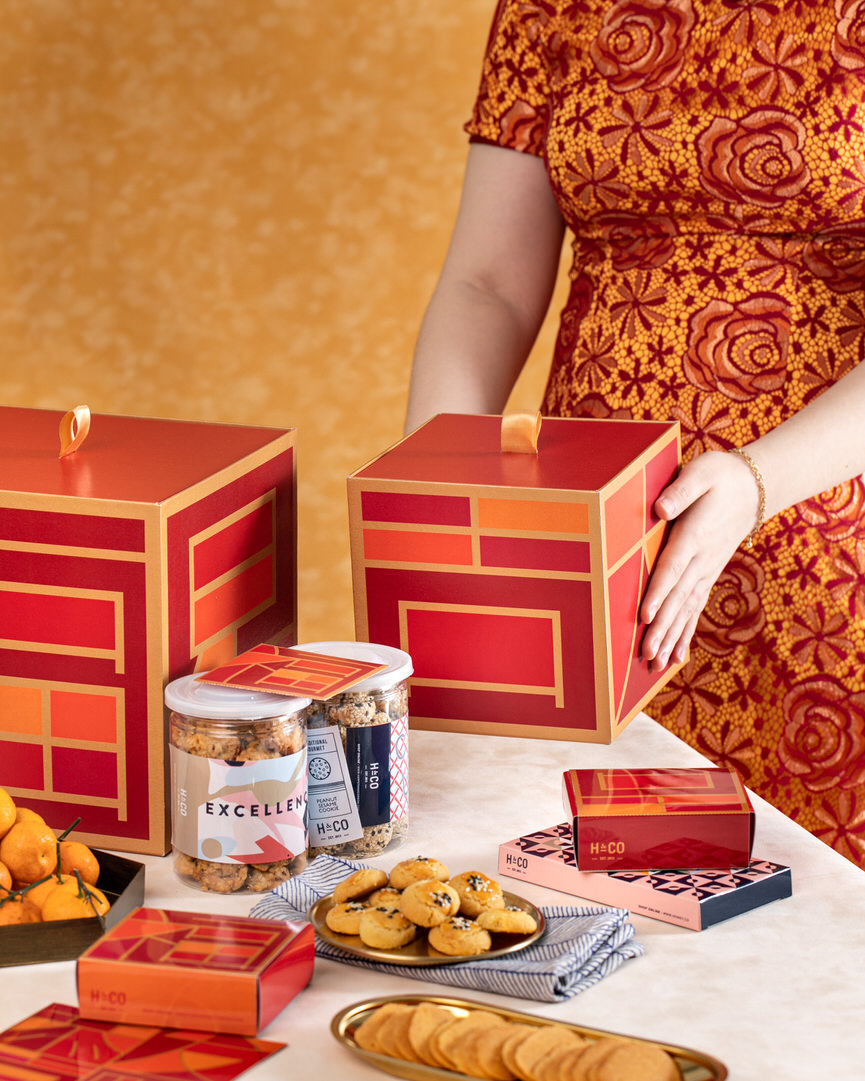 Although gift-giving during the Chinese New Year doesn’t match the intensity of Christmas in the West, gifts and thoughtful tokens are exchanged between friends, relatives, and coworkers. Visiting people on day three of Chinese New Year is considered bad luck, so many visits take place on day two. Gifts are usually brought along as people visit friends and family members in different households. Children get money and candies; adults often receive snack boxes with seeds, candy, and fruit.

With all the trouble to keep Chinese New Year conducive for good fortune, the choice of gift is very important. Gifts to avoid include watches, sandals, pears, umbrellas, mirrors, and items that are white or black. Items that total up to four should also be avoided. If you receive a gift, put it aside to open later unless the giver requests otherwise.

There's still enough time for your Chinese New Year greeting & gifting. Order now and get your gifts and hampers to be delivered ASAP today! Be quick as your picky recipients are waiting for your glorious yearly gift.